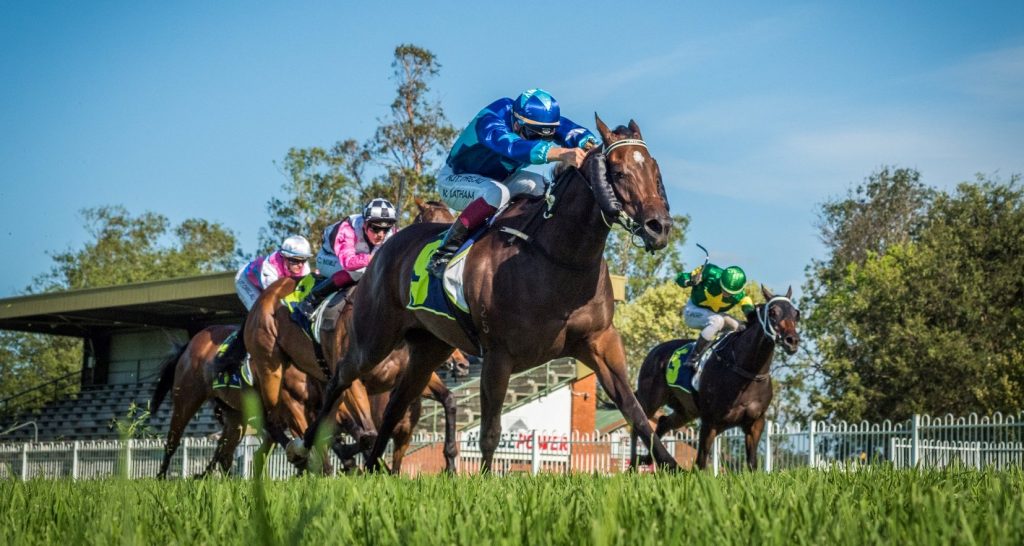 Scone trained mare Charlotte’s Heart will go to the Tamworth heat of the Country Championships next month without another run after resuming to win the Championships Preview at Muswellbrook on Tuesday.

The win will lift her benchmark rating and assure her of a start in the Hunter and North West.

Charlotte’s Heart went into the Muswellbrook race on a 70 benchmark and trainer Brett Cavanough was keen to lift the rating to make sure of a run.

The mare had not had a run since winning at Tamworth last October but Cavanough set out some months ago to get her into the Tamworth heat.

“It is good when a plan comes off,” Cavanough said.

“I wanted her to have a hard run in this race and win to get her benchmark up,” Cavanough said.

“She won’t have another run.

“Keagan (Latham) rode her a treat, it was an 11 out of 10 ride, but I am not making any decisions about riders yet.

“She won’t be our only heat runner.

“There are two others at home I will nominate as well.”

Latham settled the mare in fourth place on the fence then went to the lead in the straight to beat Beauty Best (Cameron Noble) by two lengths.

Luke Thomas scratched Asudem because of the heavy track while Trophies Galore was scratched early in the afternoon after she broke out in welts in her box.

“The stewards had the on-course vet here in a matter of minutes and ordered that the horse be scratched,” Robinson said.

“Yet a couple of hours later she was right as rain.

“We have had bloods taken and everything is right so she was will run at Newcastle on Saturday.

“I nominated for Newcastle as a back-up plan after all the rain we had here and it turned out to be the right move.”

Asudem’s trainer, Luke Thomas, is likely to nominate for Tamworth without another run and hope he gets a run.

If not, he has the Wild Card as a back-up plan.

Wild Fortune under lined her potential by winning the final race, the Wildcard On Sunday 22 March Class One (1000m) in fast time.

The Kris Lees trained filly was having her first start since September and a first preparation which produced a win and two placings.

“She is not a big filly but she furnished out and strengthened up during the break,” foreman Chris Hull said.

“She is a promising filly.”

Her winning time, 57.82 seconds was only fraction more than a second outside the track record.

“The ground was sticky on the inside but she still let down well,” apprentice, Tom Sherry, said.

Gerald Ryan sent first starter Snitzinnati to Muswellbrook confident she could handle the heavy track and the Snitzel filly turned in an impressive debut win in the Cup Day Ticket On Sale Now Maiden 1000m.

Despite jumping from an outside barrier Snitzinnati (James Inness Jnr) flew down the outside to win by three quarters of a length in a smart 58.22 seconds.

“We thought she would handle the conditions and we were right,” Inness said.

“Horses were getting their toes into it but the track played alright.

“We got into a good position and she hit the line really well.

Gosford’s Kylie Gavenlock has a potential stayer in Blazing Babe which scored something of a surprise runaway win in the Bengalla Mining Maiden (1500m).

Blazing Babe (Greg Ryan), a $14 chance, went into the race after a first up last in a Gosford maiden on February 4.

Prior to that she had been 10th at Newcastle last August.

“She was with a Sydney stable for a long time but very backward and very weak,” Gavenlock said.

“It was a matter of a giving her time and letting her strengthen up.

“I will step her up for her next start.

“I think she has the making of a nice stayer.”

Ryan settled her well back early before getting over to the fence then gradually edged forward to be poised behind the leaders on the turn.

Ryan was presented with a huge gap, drove the filly through then let her drift to the centre of the track and raced away to win by three lengths.

That was followed by another long-priced winner when the Brett Cavanough trained first starter Fender (Keagan Latham) won the R U Keen For Cup? Maiden (1280m).

The giant son of Toronado, which started at $21, led all the way to win by one-and-three quarter lengths.

“We have always had opinion of him but the query was whether he would handle the track but obviously it was not a problem,” Jack Cavanough said.

“He is consistent but not very good but is a four lengths better horse on a heavy track,” de Montfort said.

Eden Vale was backed into the $3.50 favourite on the strength of his wet track form over the early favourite Holy Sunday ($4).

Those two hit the line with Eden Vale (Shaun Guymer) wide out and Holy Sunday (Lee Magorrian) on the inside hitting the line locked together with the third favourite Midi (Robert Thompson) and $100 chance Urban Prince close up behind them.

Punters were on the right track when the Wyong trained Oakfield Gettem (Grant Buckley) unleashed sustained speed to lead for most of the trip to win the Magic Millions Benchmark 58 (900m).

The Damian Lane trained sprinter opened at $13 on the strength of several unplaced runs over 1100 metres at Wyong to be backed in to start at $4.80.

“She was finding the 1100 metres and provincial grade too hard so we decided to bring her back in distance and down in grade,” Lane said.

The win was the second for Lane and the horse’s owner, former Port Stephens Mayor Bruce MacKenzie.

They won with Oakfield Jet (Darryl McLellan) at the Cessnock meeting at Newcastle the day before.

Punters struck again in the next race when the Pat Farrell trained Polish Train (Greg Ryan) stormed home from well back to win the 1st American Pharoah Yearlings Selling in 2020 Benchmark 58 (1280m).

She was backed in from $16 to start the $4.60 equal favourite despite a last start seventh over 1600 metres at Scone.

“She is not a 1600 metre horse and having Greg on is a huge advantage,” Farrell said.

Despite the confidence that punters showed in the mare they would have been worried when the field turned for home and Polish Train was second last.

Polish Train responded to Ryan when a gap presented itself near the 300 metres and she sprinted quickly to win by a long neck from Take To Heart ($6.50).

“The others were starting to get tired and she had an easy run early plus she appreciated the conditions,” Ryan said.

“At Scone she felt ordinary going to the barriers but today she felt good.”