Muswellbrook Race Club has a crackerjack eight race card which is highlighted by the debut of the Tab.com.au Rusty Spanner Sprint over the 1000m. The rail is in the True position and with nothing but warm weather in the lead up, the track will be a Good 4 and in pristine condition.

This is the debut preview for Joshua Reed from Racingbet.com.au which is a new racing website with articles and tips for racing around Australia and Sha Tin. Joshua looks forward to doing regular previews for Muswellbrook Race Club in the future and further developing his relationship with the club. You can follow Joshua on twitter – @RoganJosh_9 and follow his previews for other NSW meetings at www.racingbet.com.au

Tough race to start the day here at Muswellbrook with a lot of selective form and a couple of first starters. I have settled with (12) Owhata Crumpet for the Pat Farrell stable and I am banking on the solid jockey change and being back to 900m as the key. I am willing to put a line through last start where I thought she was only fair and go back to her start before here a Muswellbrook where she finished second. A horse by the name of Mandalong Roman ran third that day behind our pick and has since come out and won two races. From a nice draw, I am expecting a solid ride from Greg Ryan and we should get a sight for our money.

Another maiden early in the day doesn’t help the old wallet, but I think we have one here in the Kris Lees trained (2) Surf. First-up this preparation, she was only fair over the 1500m here at Muswellbrook where she finished four lengths back in third behind Spring Secret and Al Sahara, who have both run well since. Last start she stuck to the 1500m here at Muswellbrook where she once again finished third in a much better effort, 1.8 lengths behind Leeward and Au Pair. She is drawn ideally for this race, will be fighting fit after two solid runs and retains Andrew Gibbons which are all positives. She looks like she will relish the step up to 1700m and looks the one to beat.

I really like (3) Danza in the Dark here, who is coming off a nice win to break his maiden status at Dubbo. Aaron Bullock got the job done on the short-priced favourite on the day, saluting by less than a length. His form prior has been good, running around horses that have since won nicely like Married, Lady Patricia, Mischief Managed and Moyassar. I love the fact that Aaron Bullock sticks with him here as he steps up to the 1450m and remaining on a nice surface. I expect him to get a nice run throughout from the inside barrier and be hard to hold out.

This definitely looks a race in two between (1) Leisa Louise and (2) Now or Never, and I have settled with (1) Leisa Louise. I thought her last start effort behind Mother’s Mercy was quite good despite being run over late in the race and going down by a length and beating rival (2) Now or Never by half a length. Our girl meets her rival 1kg better off for that run thanks to the 3kg claim of Dylan Gibbons, who will no doubt put her in a prime position from the nice barrier. I don’t think the step up to 1450m is a worry, considering she has performed well over the mile in the past and this race looks to have little speed in it, so she will most likely be doing little work in the run.

This race has given me a headache with a lot of different formlines and a lot of big stables contesting this race. (7) Teronito is who I have settled with from the Nathan Doyle yard and I am expecting a bold showing from the Excelebration gelding. The gelding was moved on from Gwenda Markwell to Dean Mirfin (who only had her a little while) before heading to Nathan Doyle and has since had one nice trial in preparation for this one. Usually a change of scenery is good for a horse, mixed with the step back to easier company can be a nice recipe for success. He is drawn ideally to get a nice run throughout and hopefully we will see plenty of improvement!

I think this is one of the better bets of the day as (12) Leeward comes back to Country grade. She won nicely first-up over the 1500m here at the start of the month before tackling the Group 3 Spring Stakes at Newcastle last start where she didn’t overly perform well but considering it was her second start, I am willing to forgive. She still finished within three lengths of some nice city class horses that would be very short if they started here. Grant Buckley back aboard and up to 1750m, I think she will be hard to beat. 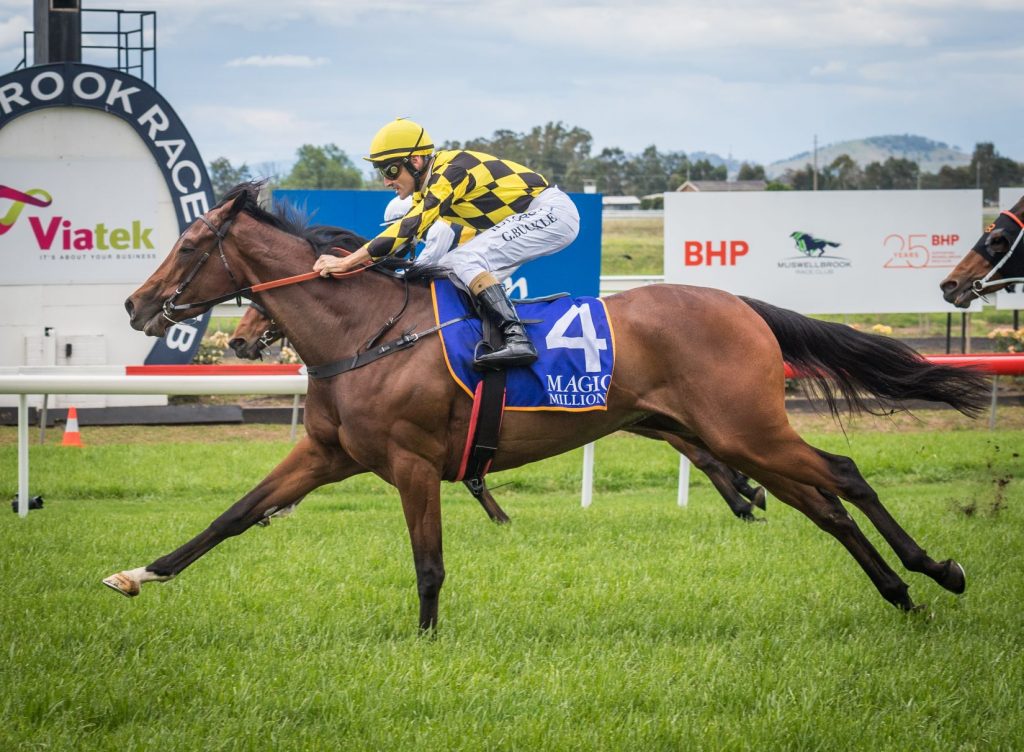 Leeward winning on debut at Muswellbrook

The highlight of the day is this race and if you blink, you will definitely miss them. (11) Remlaps Gem is my on top pick here resuming after almost four months off. Showed last preparation that he is a serious country sprinter at a minimum, making light work of Toto, Golden Missile and Crackerjack Kenny early in the preparation. I put a line through his failure second-up before making light work of his opposition at Scone before going for a spell. He carries the lightest weight he has ever carried from a nice barrier and will either lead them up or be just outside the lead throughout the run. He will give them something to catch.

Tough race to finish the day and I will be happily playing around two runners. On top I will have (3) Free Rider who was massive last start at Scone carrying the 62kg and I love the fact Aaron Bullock is back aboard. The issue we might face is the barrier and depending on tactics could be the make or break of him in this race. I think he goes close regardless. The other I want to play is (10) Whitchety Grub who is the lone runner for the Matthew Vella stable. She is returning off a semi-successful campaign where she broke her maiden before winning a benchmark 58 at Mudgee. Forget her last run of the preparation, she wasn’t comfortable in the conditions and was found to be lame. The blinkers go on for the first time and I expect a good run.