Nathan Doyle set himself a goal to try and win his home town cup with the out of form Petrology and the plan came off when the eight year old, ridden by Ashley Morgan, careered away to win the $150,000 Viatek Muswellbrook Gold Cup (1500m) on Friday.

Petrology ($51) came from second last at the turn with Morgan threading his way through the field in the straight.

The horse hit the lead at the 250 metres and careered away to win by three and a quarter lengths from Love Shack Baby ($16) with Bobby Dee ($5) another three and a half lengths away third.

The $3.70 favourite Shock Alert pulled up a long last, more than 21 lengths from the winner.

The horse had a tough run and was vetted after the race and found to have a slow recovery rate. 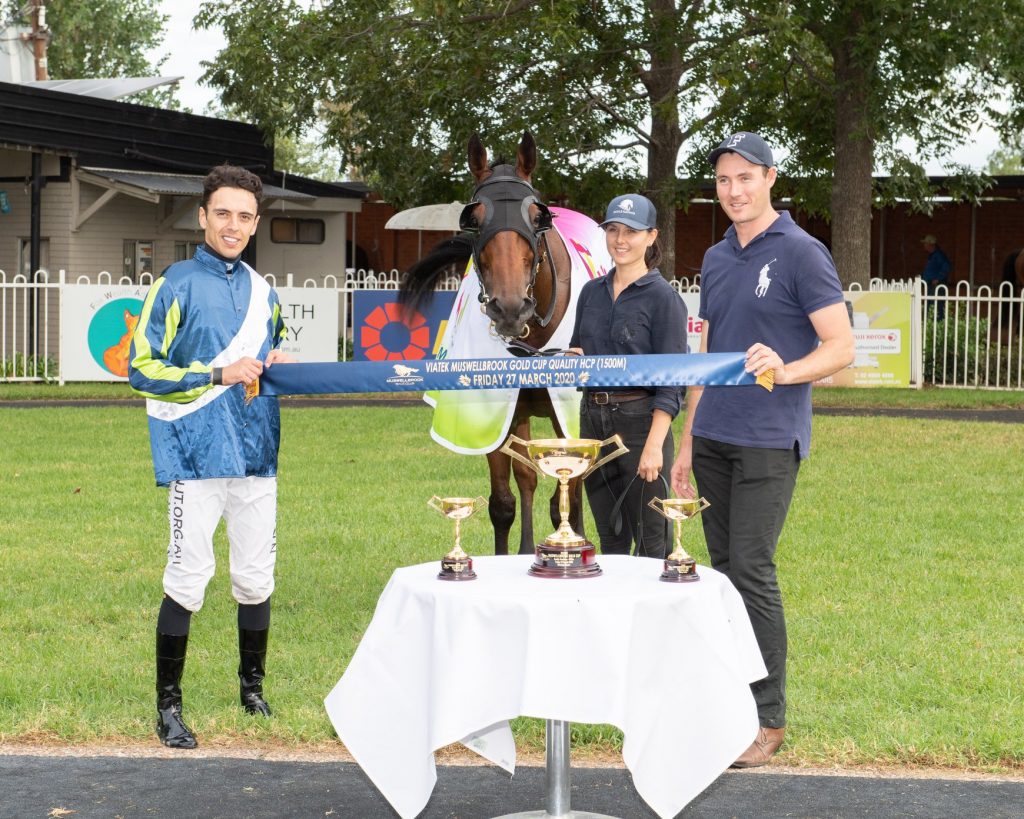 Doyle was born and raised in Muswellbrook and started his training career there but then took a sabbatical and went to Peter and Paul Snowden and Mark Newnham to work in their stables and gain more experience.

He now trains out of Newcastle and has found a new lease of life in Petrology.

The horse spent the majority of his career with David and Ben Hayes and Tom Dabernig and won five races for them including the Group Two Sandown Guineas in 2014.

In 2017 he ran third in the Group One Toorak Hcp at Caulfield and followed that up five months later with a third in the Listed C S Hayes at Morphetville.

However, his form fell away and eventually the horse was switched to Matthew Dunn at Murwillumbah.

His best effort for that trainer in four starts was a second at the Gold Coast before the horse ended up with Doyle.

“I am so grateful to Mark Pilkington (Seymour Bloodstock) for sending the horse to me,” Doyle said.

“I told Mark after the horse came to me that the cup was the race, I had in mind for him.

“Moving the cup to March was just perfect.”

Doyle gave the horse two runs at Randwick in September then turned him out for a break.

“I gave him two lead up runs in town without the blinkers but I put them back on for this race and it worked.

“He didn’t have any major issues when I got him apart from the normal wear and tear of an eight- year-old.

“I just keep changing things around and keep him mentally happy.

“He gets plenty of attention and a good pick every afternoon.

“Horses like him don’t lose their ability, you just have to get them back into form.

“I have no idea where we will go with him now.

“If racing continues, we might have to look at Listed races with him otherwise he will get too much weight.”

“Ashley rode him perfectly, that is exactly how he has to be ridden,” Doyle said.

“Ashley rides a lot of work for us and he and Petrology get on so well together and they certainly gelled today.”

Brett Cavanough still does not know what happened to Star Boy when he ran last at Eagle Farm last month but he made up for that failure by winning the Horsepower Skellatar Sprint (1000m).

Ben Looker bounced Star Boy ($11) straight to the lead, then eased back to be running third behind Iamacrumpet and Ozark to the 600 metres.

At that point Looker let Star Boy take control and he was never headed after that to win by a length from the luckless Black Magnum (Rory Hutchings). 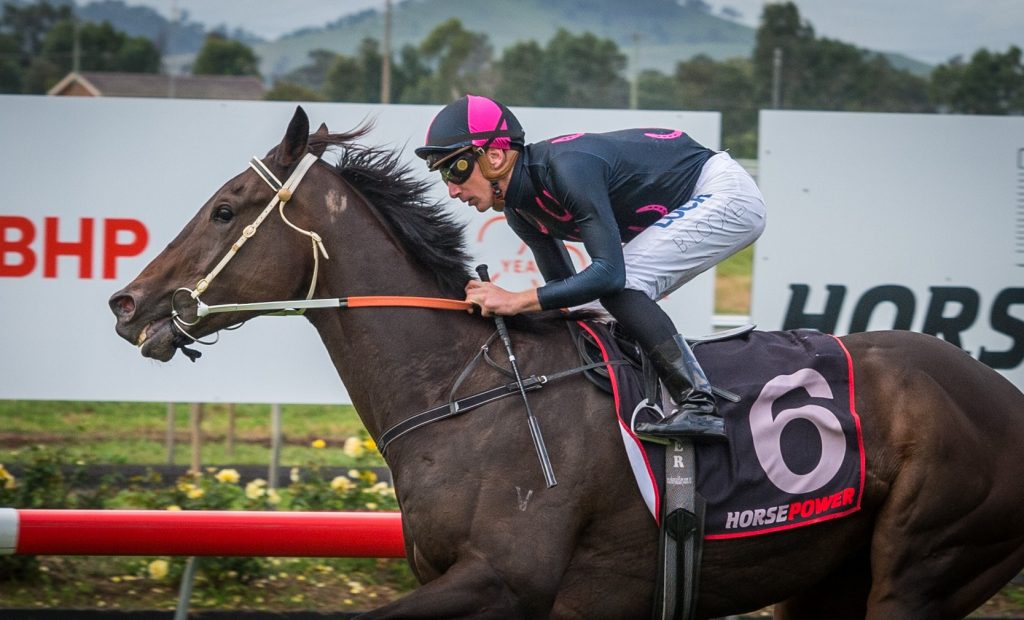 “Everyone is confused about what happened in Brisbane, the trainer, the owners and even the horse,” Cavanough said.

“He is a horse that has to be allowed to roll and use his natural speed and James (Orman) did not do that.”

Looker certainly did and despite the track being rated a soft 6 he ran a smart 57.31 seconds and ran home the last 600 metres in a sizzling 33.23 seconds.

Black Magnum ($4.80) was wide all the way and came down the centre of the track but never looked like he would catch the winner.

The win takes Star Boy’s record to eight wins from 21 starts including a Highway at Warwick Farm while he ran a close second in last year’s Listed Ramornie Hcp at Grafton.

Belle Of Portugal (Mikayla Weir) scored her first win since July 2018 and her first for new trainer Stephen Gleeson when she stormed home late in the Pirtek Muswellbrook Benchmark 58 (1280m).

Gleeson took over the mare in January and she was having her fifth start for him following a spell.

In the straight she was blocked for room and Weir had to ease around heels to the centre of the track.

In the last 100 metres Belle Of Portugal ($15) charged to beat the favourite War Cat by three quarters of a length.

The win came as no surprise to Gleeson. 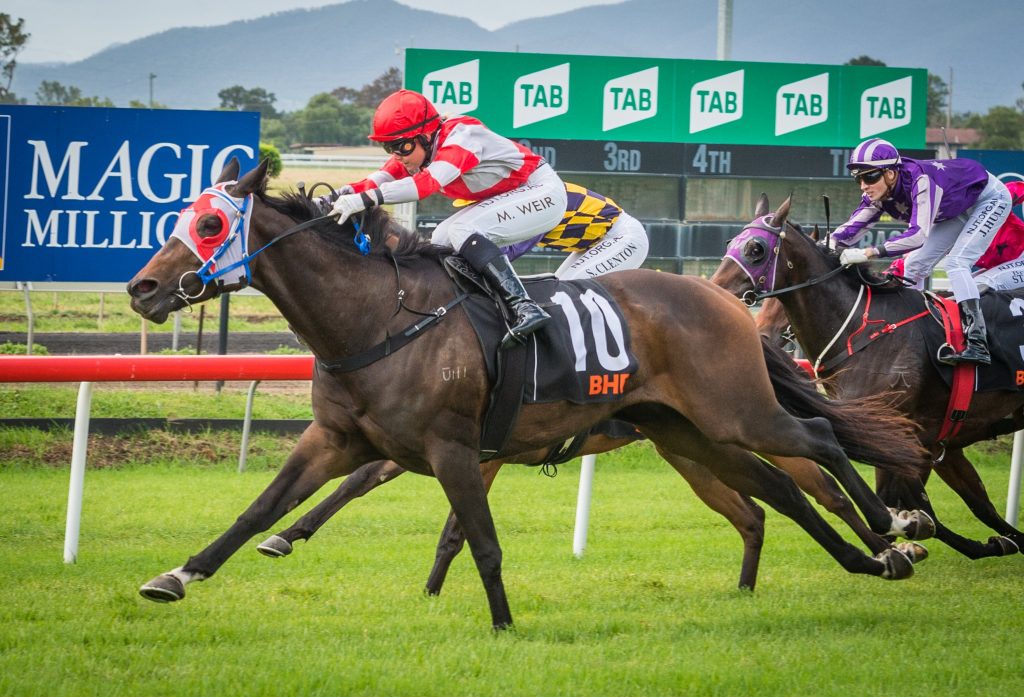 “I thought her last two runs, particularly her last one at Scone, showed she was getting back to form,” Gleeson said.

“I thought she was going to win that race but she got swamped late.”

The horse was switched to Gleeson from Peter Eggleston when that trainer had to undergo surgery.

“Apparently Peter is taking a break from training until he recovers and the owners rang me out of the blue and asked me to take the horse,” Gleeson said.

“Dad trained a horse for them when I was 15, just before I started my apprenticeship.”

Gleeson had a good day, finishing fourth with Forbidden Palace in the maiden and third in the Class One (1000m) with Wrongfully Wrong.

The win by Belle Of Portugal gave Muswellbrook its first winner for the day but 40 minutes later Andrew Robinson followed up with another local success by winning the BHP Mt Arthur Coal Wayne Harris Hcp (1280m) with Trophies Galore, ridden for the first time by Darryl McLellan.

“I think the 1400 metres saw her out and she was much more comfortable over the 1280 metres today,” Robinson said.

“She has been a great mare to us and the owners and she loves racing on her home track. 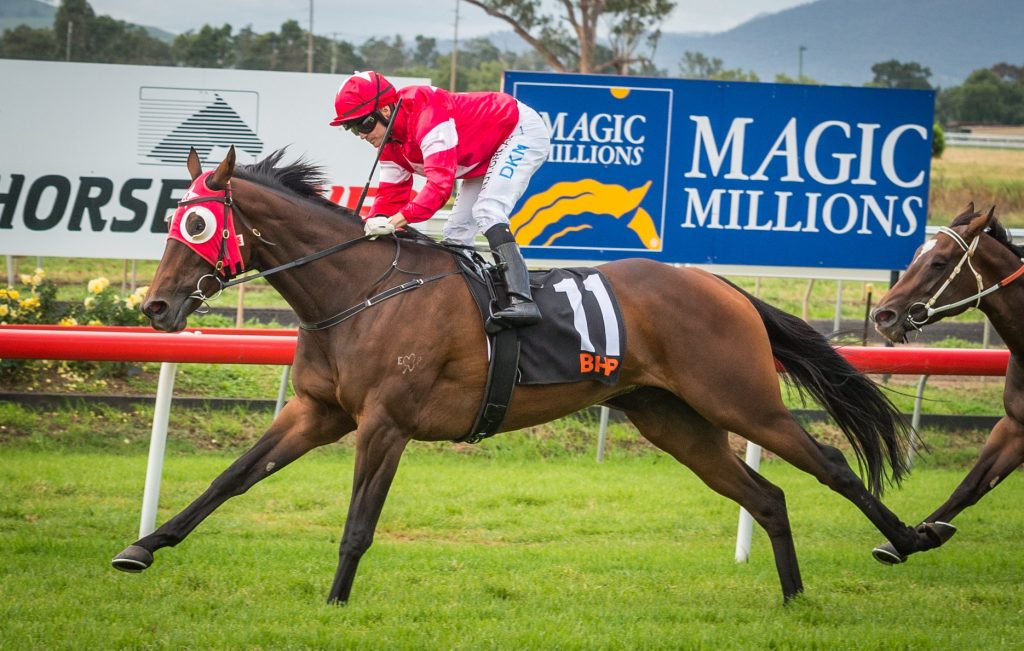 “I asked Darryl just to cuddle her and get her comfortable with a trail and that is exactly what he did.

“I was very easy on her during the week and it was just a matter of making sure she had totally recovered from last Sunday’s run.

“I don’t know how we are going to celebrate.

“We can’t go out for dinner so we’ll just have to stay at home.”

Trophies Galore ($7.50) settled mid field but at the top of the straight the leading pack fanned and McLellan was presented with a run.

He drove Trophies Galore through and she quickly ranged up to Emperor’s Star ($5.50) then raced away from her over the concluding stages to win by one-and-three-quarter lengths.

That win took the mare’s tally to six wins and five placings from 19 starts and makes up for the fact she had a luckless run when 10th in the Tamworth heat of the Country Championships and missing a run in last Sunday’s Wild Card because her rating was not high enough.

She went to the Tiara instead but again had no luck, running into trouble in the straight.

Cameron Crockett praised Samantha Clenton for her ride after she steered Brother Bassy to a win in the Prime 7 Maiden (1280m) and left the connections of Dreaming Of Gold lamenting yet again.

“I don’t know what was happening but my horse would not settle and it was only that Samantha is such a strong rider she was able to get him travelling,” Crockett said.

“Perhaps he is trying to send me mixed messages.

Brother Bassy was wide early but Clenton was able to restrain him and get him on to the fence and trailing the favourite Dreaming Of Gold.

Dreaming Of Gold (Christian Reith) hit the lead in the straight but Clenton pushed Brother Bassy along the fence to overhaul her and win by half a length.

That was Dreaming Of Gold’s sixth start and her sixth second including placings on the Beaumont track at Newcastle and at Hawkesbury.

The horse was backed in from $4.40 to start the $2.70 favourite with Keagan settling him in third place on the fence.

In the straight he took advantage of the cutaway to go to the lead then held off More Spice (Mitchell Bell) to win by one and a half lengths.

Latham later made it a double when he won the Eaton’s Hotel Class One (1000m) on Vox Pop, trained at Randwick by John Thompson.

The Brett Thompson trained Larynx hit the lead in a 1400 metre race at Orange last Sunday only to be run down in the shadows of the post.

Thompson backed him up for the TAB Country Magic Class Three (1450m) and this time, with Andrew Gibbons aboard, he held on to win, beating the Tim McIntosh trained favourite Absolute Trust by three quarters of a length.

“I have a lot of time for this horse,” Thompson said.

“I think he will be a very nice horse next preparation and I think 1600 metres will be his best distance.”